“What?!, You are writing an adventure blog and you are afraid to fly?!”  Yep, that’s me. Well, it was me. To be honest, all public transportation gives me some kind of anxiety. I need to know how the Pilots’ lives are going, if the Captain of the ship is having a good day, was the train’s Automation Engineer in a hurry? Nevermind the sheer volume of people on these vehicles of mass transit (separate issue). The first time I flew was way back in 2003. Almost 2 years post 9/11, where this catastrophic event had changed everybody: the frequent flyers, the excited but equally nervous nellies, and even the people who would have never stepped foot on a plane anyway.  Looking up at the sky and not seeing or hearing any planes for days after the event was strange and sad. You could feel the whole world mourning in the silence, desperately trying to figure out what to do next.

I was one of those excited but nervous people. Sweaty palmed, sure the plane was just going to fall out of the sky. I was equally as awestruck thinking something as large as a plane could transport people an incredible distance to wherever their hearts desired. I was torn. I wanted to feel the adventure of travel this way but I was so scared.

Back to the sweaty palms. I was learning the ropes, preparing for my first flight from Philadelphia, through Chicago, to Washington State. I was so nervous. I was nervous enough that the Security Officers must have noticed. I believe it may have been due to the heightened security restrictions put in place at the time, that there were more Security Officers around. They randomly pulled people from the boarding line for extra examination. Of course, it was me. Did I look suspicious? Could they see how anxious I was? So much for thinking I hid it well. Kyle and I had only been dating for about a year so I didn’t want him to think I was crazy! (Ha!) I only had a carry-on backpack so it went fairly quick.

I had traveled a few more times via air over the few years following. I only realized I had a full-blown fear after I got a job which required plane travel a few times a year. It was an amazing job with awesome perks! I traveled with coworkers to Marathons across the country. I did not fly enough to get comfortable with it. So each time I flew, I felt like I couldn’t see past the event. I  was so stressed about it that I couldn’t immerse myself in the new places that I was visiting like Boston and Nashville. Once I got there, I only focused on being worried about the flight home. It was exhausting and even a bit embarrassing.

Enter Kyle’s new job. In 2011, he began a job as a Field Service Engineer in the Philadelphia area. He did mostly car travel but now and then training or a long-distance customer would pop up. His initial training was for 5 weeks in Nevada. At the time, we lived in Virginia so it was more or less the whole way across the country. Love won that round! I got onto a plane by myself, 20 weeks pregnant and silently freaked out the whole time.

Once our first son, Asher was born later that year, more travel started to pop up for Kyle. This time, it was training…in Rotterdam, Netherlands! Fantastic. Another 3 weeks of travel for him and I was stuck at home with a 9-month-old? No way. I had to go! We had to go! Asher and I got on a red-eye to Amsterdam. Once we landed, I was feeling pretty confident. Being alone in a foreign country with a 9-month-old was a bit scary to think about but I had this under control. Everyone was nice and helpful. Our next hurdle was getting on a high-speed train to Rotterdam. Magically, I got on the right train, going in the right direction and seamlessly arrived in Rotterdam at the train station. While you have to be super vigilant about everything traveling solo, possibly more so with a small child, you also have to give in to accepting help here and there. Were there a few tears shed? Yea. Thankfully, after an incredible week of immersing ourselves in the beauty of the Netherlands, our whole family was able to get on the same flights home. Of course 5 hours into the last leg of our flight from Ireland, about 1 hour left to Philly, they come over the loudspeaker…going on about some potential severe turbulence. Inconveniently, I had run out of formula for Asher back in Rotterdam. I had to buy a European version of Nestle, which worked out just fine until around the same time the pilots were mentioning the impending turbulence. Asher threw up everywhere…all over both of us. That kept my brain busy while we had quite possibly the smoothest flight into Philly ever. Silly how that works out, but I am sure to say “thank you” to the pilots and flight attendants of every single flight I have ever been on. 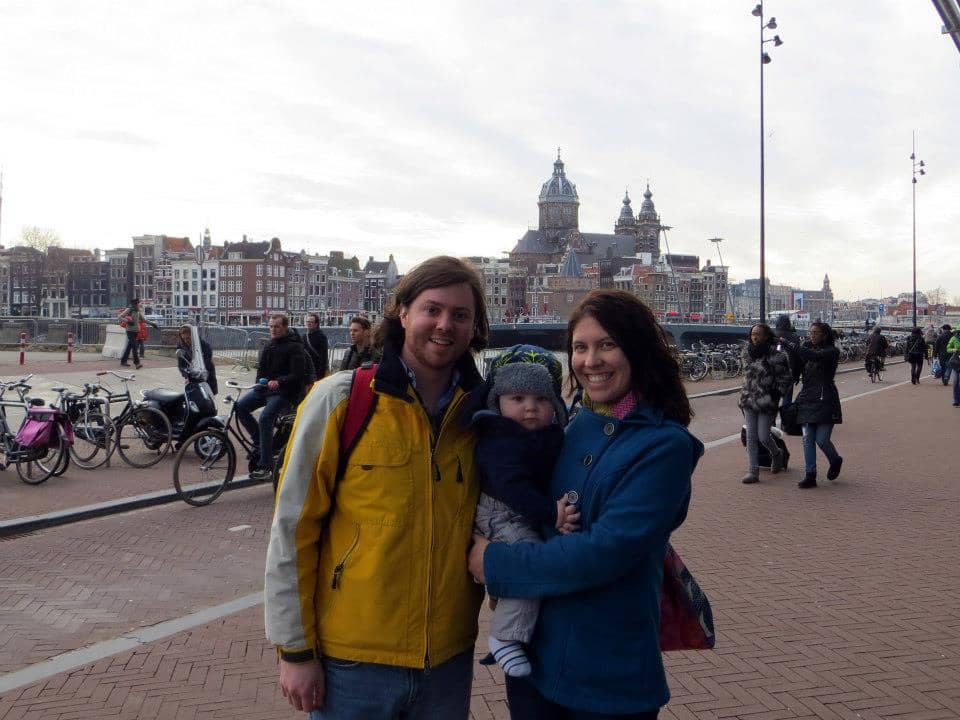 Every once in a while, I would begin to feel more adventurous. In the summer of 2015, I decided that I wanted to visit my sister out in New Mexico. Between our move from New Jersey to West Virginia and Kyle’s busy work schedule, I knew I was going to have to do this one on my own. I was able to talk my Mother-In-Law into going along! She wanted to visit the Southwest and was looking forward to spending the time with Asher. Our flight was from BWI (Baltimore), stopping through Kansas City, MO and finally onto ABQ (Albuquerque). The first portion of the flight was fine. When we began to descend into KCMO, Asher started mumbling about the plane going down. When you are not a great flyer, hearing your child say “we’re going down, we’re going down!” just does not sit well. He wasn’t wrong. We were descending. He was a bit upset about it though. A unique part of this 2 legged flight was that we didn’t change planes when we stopped through KCMO. Quite a few of us stayed while others disembarked. I figured I had a few minutes so I quickly ran to the bathroom. Big mistake. Asher thought I was leaving without him. So he was already a bit upset but now full-blown red in the face and nearly hyperventilating by the time I got back. The plane was just getting ready to back up away from the terminal. I quick called a flight attendant and told her we had to get off the plane. I CAN’T believe they let us off the plane!!! So once we got out into the terminal area, Kyle’s mom and I just looked at each other. “What the heck are we going to do now?!” Well, we drove. We drove from Kansas City to Topeka that night. I called Kyle to let him know just how much of a hot mess I was so he made a hotel reservation for us. We knew the next day was going to be a long drive to Santa Fe. We had to get the rental car back by 5:30 PM. Somehow, we did it!

Looking back and telling that story is pretty embarrassing for me. I felt stupid, defeated. But right after those negative feelings flood back, the positive ones take over. Kyle’s mom, Asher and I had a great time driving! It is a memory we did not anticipate making, but it is one that we hold near and dear now. All because Dusty Crophopper crashes in Planes: Fire & Rescue. 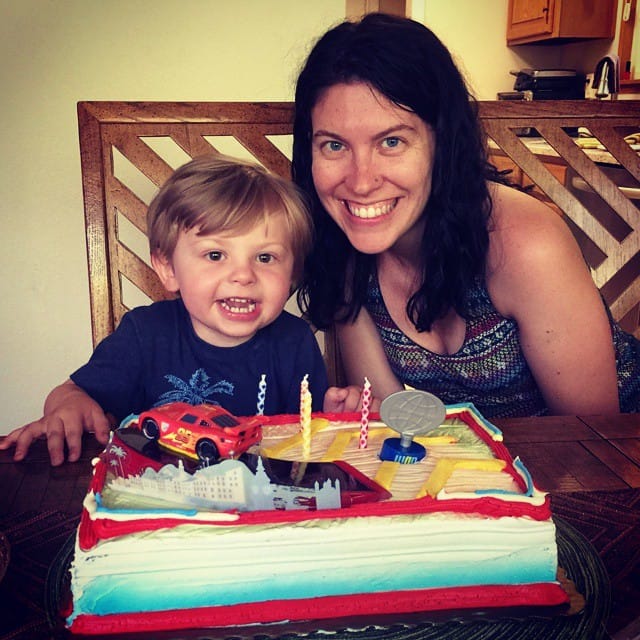 The whole week we were out visiting there, I wondered if I was going to be brave enough to get on our flight back home. I figured it was a 7 AM flight and maybe Asher would still be sleeping. It didn’t start so smooth. He was crying while boarding which had me stressed. Once again, good people came to my rescue with comments like: “Oh, been there, it’ll be alright” and “Hey it’s ok, he will feel better soon”. Those people didn’t have to say anything to me but they did. They passed on some good vibes which I credit for keeping me sane in the boarding process. The flight ended up being very uneventful. This time, when descending back into Baltimore, I got worried. Asher wanted to look out the window and he even mentioned that the cars looked like tiny little ants moving around. Phew. Survived another one.

We have taken plenty of flights since the great debacle of 2015. While most times, I had been quite anxious about them, I could still feel that I was getting better. The moment I realized that I was completely over my fear didn’t come until April of this year, 2019! Kyle had gotten the opportunity to travel to Prague, Czech Republic. I had lost sleep over whether or not we should tag along. Could I let the fear roaring in my head and the expensive tickets decide for me? No. This was quite possibly a once in a lifetime trip so we just had to go. It would be one of the longest flights I have gone on to date and potentially the most expensive as well. It was also the easiest. I could hardly believe it. Did I just get over my fear of flying? I wasn’t quite sure it was even possible. I realize that the more often I fly, the more comfortable I feel. Seeing the beauty of these places made me realize that if I couldn’t get on a plane, I could never have these experiences and neither would my children while they are young and impressionable. I have to continue traveling. I hated the thought of them seeing my fears casting shadows on their experiences while they are growing mentally and emotionally. I told myself a long time ago…”Don’t let this fear get in your way. You are allowed to feel it, just don’t let it dictate your actions.” Look where I am now! I can say with confidence that I overcame my fear!!

Hi, thanks for stopping by! We are a family of adventure seekers and encouragers of the outdoors. We are here to share our stories in hopes that you find the inspiration you need to step out of your comfort zone, go see the world and take your kids along for the ride!

We call it “The Hable Way”.

This website uses cookies to improve your experience while you navigate through the website. Out of these cookies, the cookies that are categorized as necessary are stored on your browser as they are essential for the working of basic functionalities of the website. We also use third-party cookies that help us analyze and understand how you use this website. These cookies will be stored in your browser only with your consent. You also have the option to opt-out of these cookies. But opting out of some of these cookies may have an effect on your browsing experience.
Necessary Always Enabled
Necessary cookies are absolutely essential for the website to function properly. This category only includes cookies that ensures basic functionalities and security features of the website. These cookies do not store any personal information.
Non-necessary
Any cookies that may not be particularly necessary for the website to function and is used specifically to collect user personal data via analytics, ads, other embedded contents are termed as non-necessary cookies. It is mandatory to procure user consent prior to running these cookies on your website.
SAVE & ACCEPT